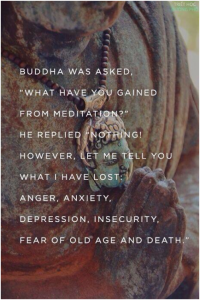 A study published in the European Journal of Social Psychology found that it takes 66 days to form a habit. But how can you be sure that meditation is a worthwhile habit? A growing body of evidence suggests that its positive effects are both grounded in neuroscience and generalizable to a wide range of populations. Consider the findings of the following studies for cultivating a mindfulness practice.

Let us consider the link between the mind and the body, and how it can be strengthened. Published in 2011, in a study titled Mindfulness Practice Leads to Increases in Regional Brain Gray Matter density, the authors begin by stating,” A large body of research has established the efficacy of these mindfulness-based interventions in reducing symptoms of a number of disorders, including anxiety1, depression2 ,substance abuse3, eating disorders 4, and chronic pain 5, as well as improving well-being and quality of life6.” Though still being explored, the neuroplasticity of the adult brain is a fascinating area of research. Essentially, the neural systems of the brain are modifiable networks. Thus, changes in the neural structure can occur in adults as a result of training. The results of this study suggest that participation in Mindfulness-Based Stress Reduction (a popular form of mindfulness training) is associated with changes in gray matter concentration in brain regions involved in learning and memory processes, emotion regulation, self-referential processing, and perspective taking. Let’s explore a few of the modifications that may impact our daily lives!

Fluid intelligence is defined as the ability to solve new problems, use logic in new situations, and identify patterns. Like a muscle, its strength declines as we get older. A mindfulness practice can be thought of as a workout for your brain to keep it in shape. If you exercise regularly, your muscles become more resilient and less prone to age-related decline. In a similar manner, the neurons in your brain are getting a workout every time you meditate, and your fluid intelligence will benefit. In the study Fluid Intelligence and Brain Functional Organization in Aging Yoga and Meditation Practitioners it was found that, “age-related decline in fluid intelligence is slower in yoga practitioners and meditators and that these practitioners have more efficient and resilient functional brain networks than matched controls… and found that mindfulness, which is a key skill developed through meditation and yoga practice, was positively correlated with fluid intelligence and global brain network efficiency and resilience.” Because of the ever growing global life expectancies and aging world population, these findings are particularly interesting in how they can be practically applied.

A study published by the National Institute of Health found similar results. The 2005 report found evidence to “… indicate that regular practice of meditation is associated with increased thickness in a subset of cortical regions related to somatosensory, auditory, visual and interoceptive processing. Further, regular meditation practice may slow age-related thinning of the frontal cortex.” The sample used Buddhist Insight meditation, which does not utilize mantra or chanting. The results of this study are important because of the positive association between cortical thickness and cognitive ability. Essentially, the thicker the neurons and gray matter, the higher the probability of performing well on tasks associated with cognitive ability.

In a study titled Meditation Lowers Stress and Supports Forgiveness Among College Students: A Randomized Controlled Trial it was found that meditation-based stress-management practices reduce stress and enhance forgiveness among college undergraduates. It specifically found marginal differences in rumination, a maladaptive form of self-reflection in which the tendency to repetitively think about the causes, situational factors, and consequences of one’s negative emotional experience can act as a detriment to one’s mental health. This finding is particularly interesting because of the correlation between rumination and depression. (see link)

Nothing worth having comes easy. But a habit that can improve your health, your relationships and the overall quality of your life is a habit worth fostering. The 66 days it would take to form the habit can change both the structure and function of your brain for the better. Due to neuroplasticity, we are capable of rewiring our neural pathways and neural anatomy, should we choose to live mindfully and cultivate a daily practice. The research is promising, but like all empirical evidence, it should be taken with a grain of salt. It is important to remember that there are many different forms of practicing mindfulness, and not every form will work for everyone. But this life is long, and there are many people willing to help you on your journey to living mindfully. Here is a great resource to start if you would like to make today day 1 of 66: